TradingView alerts are immediate notifications when the market meets your custom criteria. For example, "Alert me if Apple crosses above $150." All users can get visual popups, audio signals, email alerts and email-to-sms alerts, and also PUSH notifications that are sent to your phone. Pro, Pro+ and Premium users can also receive webhook notifications when an alert is triggered. 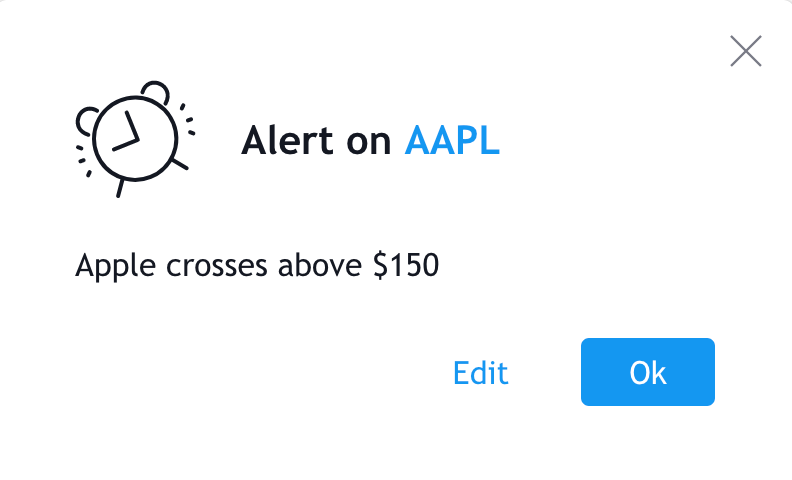 You can also create alerts on prices, indicators, strategies and/or drawing tools.

Set your own alerts and get notifications on any device. Pick a price level that matters and create an alert that triggers when there’s movement. Receive notifications through email, mobile pushes or on your desktop.

Build alerts based on any of the 1,000+ indicators on TradingView, including those created by the community. Customize each alert with predefined conditions like "crossing up" and "exiting channel" or create your own trigger settings by the means of alertcondition and alert functions.

Create an alert for a strategy and receive a notification whenever a strategy's order is executed.

Draw Your Own Alerts

Get custom alerts that are unique to what you see on a chart. Use the line drawing tool to make trend lines, channels and other custom drawings. Then you can create an alert based on what you draw.

The most basic and widely used alert. Essentially saying, “Let me know when price crosses X”. The crossing alert is triggered when the current price series crosses the value that was set when the alert is created (doesn’t matter which direction).

Usage example: "I want to know when Google goes up by $10 from the current price". Open a GOOGL chart and then open the Alert menu. The current price will be filled in the price box (right now it's 1540.30). Choose Crossing and change it manually to 1550.30. That's it!

Alternatively, you can right-click the chart where it says $1550.30 and choose Set Alert. The 1550.30 price will be filled in automatically.

Crossing Down / Crossing Up

A more specific version of the Crossing alert. You get to specify whether a price is crossed in an upward move, or a downward move. The Crossing Down alert is triggered when the current series crosses downwards past the original value set in the alert. Crossing Up, as you’ve probably guessed, alerts you when price crosses the value upwards.

Usage example: "Microsoft is currently at $44.54. I think it will go down, and then back up to $42, at which point I'll buy because it's an upward trend. So, I want to know when MSFT crosses $42 UPWARD." So, open a chart of MSFT, and choose Crossing Up alert type and type in 42.

Greater Than / Less Than

This alert is for when you want to know that the price didn’t just bump into a level you set, but actually broke through it.

Usage example: "Apple now is at $97.79 and approaching the psychologically difficult price of $100. It's likely AAPL price will bounce off $100 a few times, but once it's through, I think it'll continue to rise steadily. Therefore, I'd like to know once the $100 barrier is bypassed for good." So, you open the AAPL chart and set the alert to Greater Than $100 for AAPL, and once the price is GREATER THAN $100, you’ll be alerted.

Channels are defined boundaries above and below a certain price. Usually channels define the typical random volatility of price for a stock, and a move across channel borders can be seen as a significant or an out-of-the-ordinary move by the price.

Channel boundaries can be defined by series or levels (or a combination of the two). These alert us to the position of the previous bar relative to the channel.

Usage example: "By looking at the historical price chart, Cisco's price roughly fluctuates about $2 after each earnings and then jumps. It's at $25.86 right now. The next earnings are coming up soon and I'd like to see if price moves out of the +$2 or -$2 channel from what it is now".

If you set an Exiting Channel alert with the +2 and -2 relative to the current price, you'll automatically be alerted when that happens – without having to lift a finger.

These alerts, unlike Entering Channel/Exiting Channel alerts, don't take into account the position of the previous bar relative to the channel.

Usage example: This one is very similar to the Entering / Exiting Channel, except it lets you know if the value is inside or outside the defined channel.

Moving Up / Moving Down

This is the Crossing Up / Crossing Down alert with one additional parameter – time. You will be alerted if the stock goes up by $X within a certain amount of time (i.e. bars).

A Moving Up alert is triggered if the price goes up by a certain value that you set in the alert (within a pre-specified number of bars). The Moving Down alert does the same thing, but when the price goes down.

Alerts are available for the following drawings:

If a drawing has an active alert, you’ll see an icon next to the drawing (same color as the drawing). 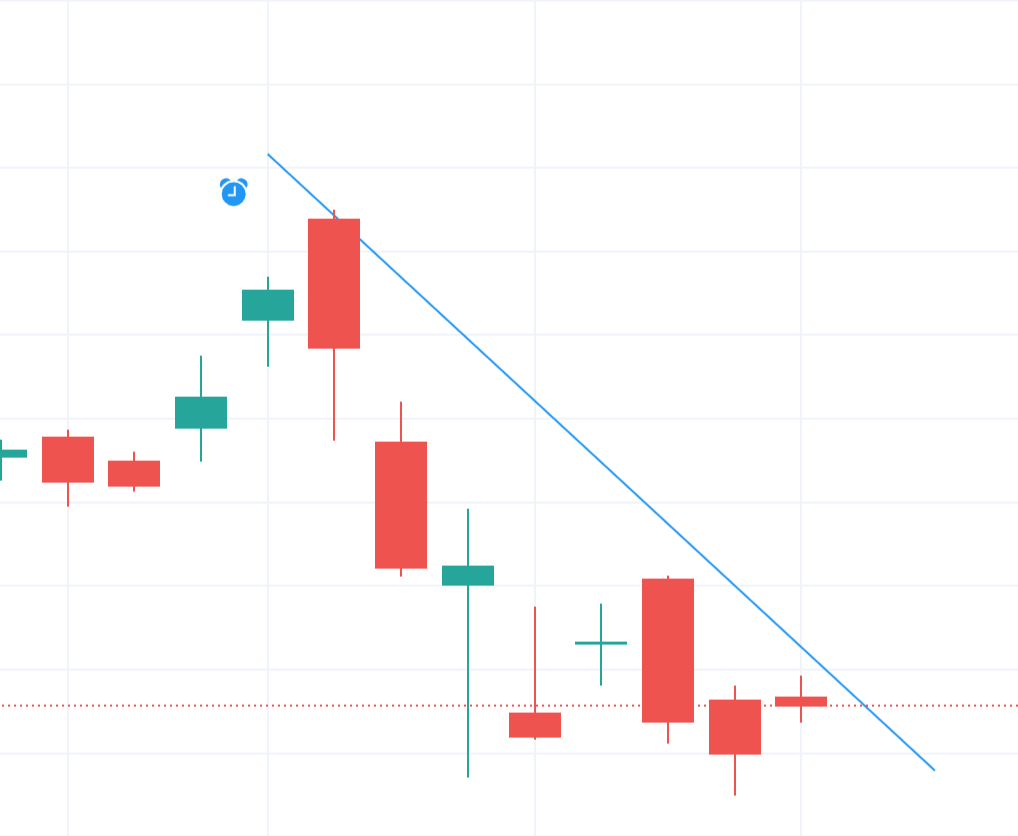 If the alert is inactive, the icon becomes gray. 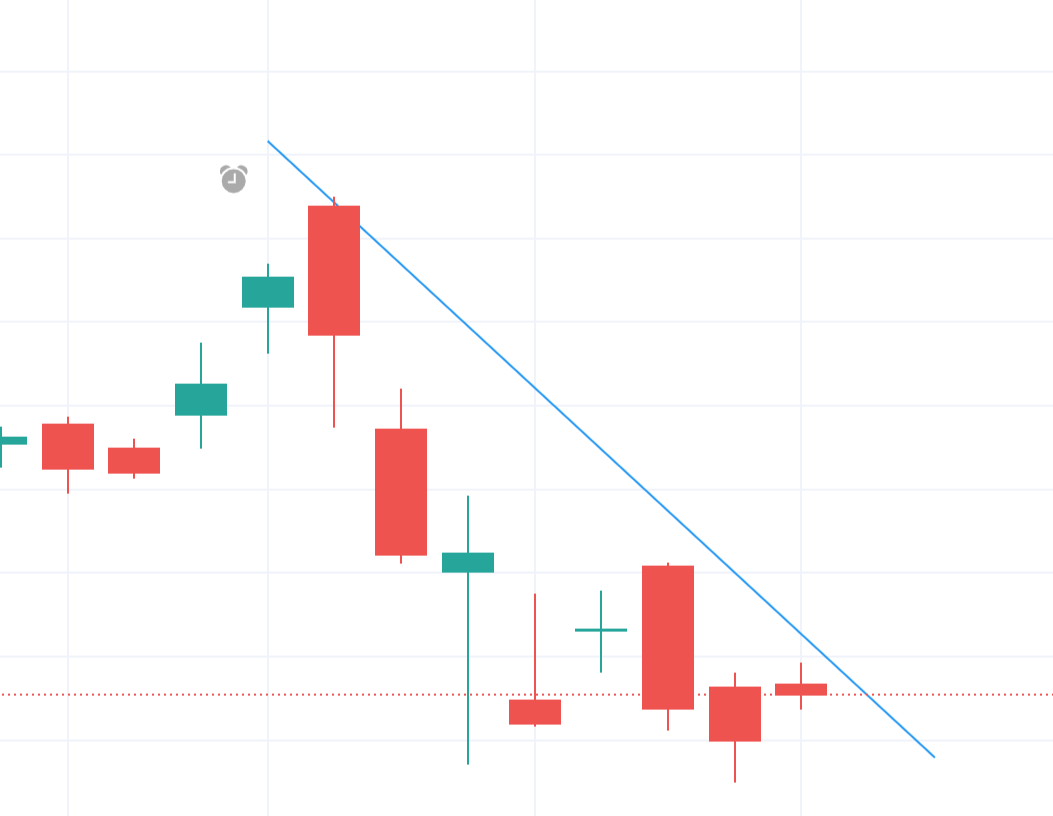 If the drawing is changed, the alert is automatically adjusted.

NOTE! Drawing alerts depend on the chart resolution, just like the indicator alerts.