Williams %R (%R) is a momentum-based oscillator used in technical analysis, primarily to identify overbought and oversold conditions. The %R is based on a comparison between the current close and the highest high for a user defined look back period. %R Oscillates between 0 and -100 (note the negative values) with readings closer to zero indicating more overbought conditions and readings closer to -100 indicating oversold. Typically %R can generate set ups based on overbought and oversold conditions as well overall changes in momentum.

As previously mentioned, the %R is used to measure momentum. %R oscillates within a fixed range between the values of 0 and -100. Williams himself set the parameters of overbought as any reading between 0 and -20. His oversold parameters were readings between -80 and -100. It is important to note that these values are traditional examples. It may be beneficial for the technical analyst to set different parameters based on the specific instrument being analyzed. Wider or narrower overbought and oversold levels may be appropriate based on historical analysis.

There are two major conditions identified by using the %R indicator. The first is standard overbought and oversold conditions. The second is momentum changes characterized by momentum failures.

Overbought and Oversold conditions are a very common signal generated by momentum oscillators. The %R indicator is no different.

Overbought conditions (traditionally defined as values between 0 and -20) can indicate either a trend reversal or in many cases, a strengthening of the current trend.

Oversold conditions (traditionally defined as values between -80 and -100) can indicate either a trend reversal or in many cases, a strengthening of the current trend.

The Williams %R indicator (%R) is used in technical analysis to measure momentum. Momentum readings can be used to identify overbought and/or oversold levels. When encountering overbought or oversold conditions, it is important to remember that that they may not be a sign of a reversal and in fact, frequently indicate the strengthening of the current trend. The best way to differentiate between these possible scenarios is by using historical analysis to look at past examples of the specific financial instrument that is being traded or analyzed. In the same vein, historical analysis can also be used to adjust the parameters that define overbought and oversold levels. The traditional 0 to -20 (overbought) and -80 to -100 (oversold) were set by Larry Williams (the creator of the indicator). Depending on multiple factors such as volatility or market news, these standard levels may not be appropriate for every situation. As with most technical analysis tools, the %R is best when used as part of a larger trading system and not necessarily as a stand-alone indicator. 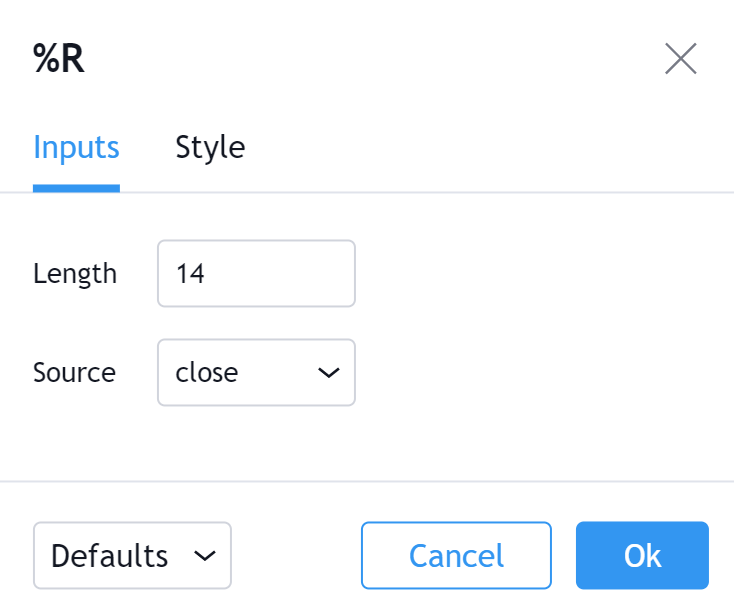 The time period to be used in calculating the %R. 14 is the default. 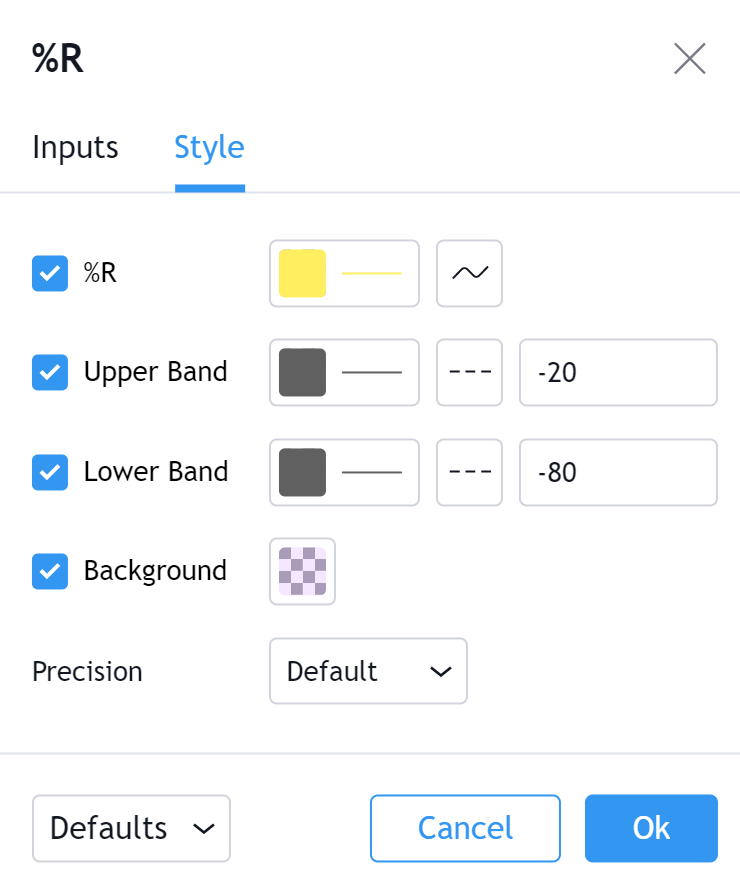 Can toggle the visibility of the Upper Band as well as sets the boundary, on the scale of 0 to -100, for the Upper Band (-20 is the default). the Upper Band's color, line thickness and line style can also be determined.

Can toggle the visibility of the Lower Band as well as sets the boundary, on the scale of 0 to -100, for the Lower Band (-80 is the default). the Lower Band's color, line thickness and line style can also be determined.

Toggles the visibility of a Background color within the %R's boundaries. Can also change the Color itself as well as the opacity.